We are now officially celebrating events concerning the 100th Anniversary of World War I.

I have been blogging about some of our family heroes, on http://nolamackey.wordpress.com/  which I will continue to do.

However, I’m really ‘into’ the local history of the Clarence River District, in northern New South Wales. Although we have no family connections here, I have been researching, collecting documents, and writing about the area now for nearly fifty years and have published numerous books.

I now plan to share some of my huge collection, starting with some stories from women’s perspective, concerning World War I.

Today I am introducing a new blog topic, which I plan to present as a serial, over the next few weeks or so.

This is the story of two sisters, the youngest daughters of James and Ann Drummond (nee Cameron), Ruth Janet Drummond, known as ‘Lute’, who was born in 1879, and her younger sister, Jean Cameron Drummond, born 1881. 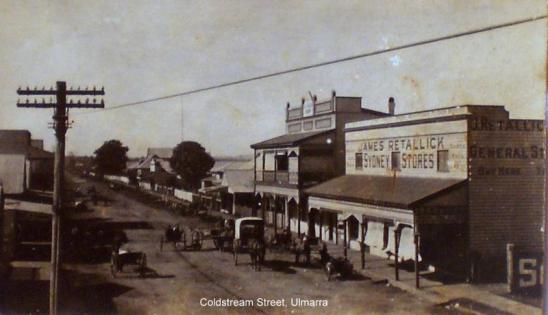 James and Ann Drummond had a family of nine children, and lived at Ulmarra, near Grafton, in northern New South Wales. James Drummond was Mayor of that municipality. (Above- Coldstream Street, Ulmarra).

The family later moved to Ballina, on the Richmond River and the girls continued with their musical studies under the tutorage of Miss Florence Irving.

Later the girls continued their musical careers travelling throughout Australia, including Sydney and Perth in Western Australia.

In the early 20th Century several ‘local girls’ including Virginia Bassetti and the Drummond sisters went to Europe to continue their careers on the operatic stage. A bold, but necessary move for women of that time, who wanted a career.

The Industrial Revolution had transformed Berlin, the capital of the German Empire, and by the early 20th Century, Berlin was the European leader in the ‘arts’ and industry.

The Drummond sisters lived in Berlin, and worked for the opera company there, for many years. When war broke out in 1914, they were ‘trapped’ for some time – Behind Enemy Lines.

The sisters later wrote about their experiences, trials and tribulations, in letters home to their family. These letters were published over several weeks in the local newspaper at Grafton. This is their story, in their own words.

To put this story into context the following links will give a brief out line and timeline of the war.

From an atmosphere that is almost unbearable, I will try calmly and coolly to write you a true account, from my point of view, of the terrible events that are just tumbling over each other in their startling rapidity.

From heart-sickening rumours of poisoned fountains, cholera, bacilli springs, Russian spies and bombs, one is glad to turn to accounts of real fighting and deeds of self sacrifice. If the preliminaries of momentous wars are all alike our Berlin experiences, then they certainly are much nobler when the hand of Time softens them into an historic perspective.

One dare not even look Russian in Germany. The crowd immediately drags the unfortunate man or woman through the streets, maltreating and insulting the pitiful object without mercy until the nearest policeman is reached, when the case is promptly dealt with. If a spy- male or female- the offender is at once shot; if not, and the passport is satisfactory, the suspect is let go, to report every other day at the nearest police station. Perhaps we will also experience these things. Who knows? All is fair in love and war. This saying we’re beginning to see the truth of.

It is almost impossible to think that on Sunday, the 26th, only ten days ago, we were flying round Berlin in an automobile with Mr Kiley and Mr Reynolds, getting excitement out of the street demonstrations in favour of Austria.

Monday was quite normal. Tuesday began the rumours about Russia mobilizing. Wednesday we commenced to scent mischief. Thursday the Kaiser came officially to Berlin and made his speech from the balcony, ending his peroration by asking the people to go into the churches, fall on their knees and pray. Friday, the wildest rumours were afloat, and war became terribly near; but on Saturday the 1st August, at 6 o’clock, the extraordinaries announced that Germany was mobilizing, and that the Russian Ambassador was given his passport. It was awful- from Thursday nobody worked- all went into Unter den Linden, where the palace is. The streets were lined with black masses, all moving and waiting, but silently, seriously- almost painfully. On Thursday afternoon we practice always at Davenport’s. Haigh Jackson laughed at us when we told him things were threatening. He said we didn’t understand the situation. Didn’t we? None keener than we followed the events with a certainty of this issue.

On Friday night we joined the great throng again in the streets, saw the Crown prince, the Princess and their eldest son come out on the balcony to bow their acknowledgements to the patriotic masses singing beneath them.

We lived only for the extraordinaries. On Friday night it was announced that the Kaiser had given the Czar 12 hours to decide. On Saturday at noon we should know. At noon, another six hours’ respite was granted. The Davenports started to pack. We have no money in hand. We possess 30s and a cheque for £30 which no one can cash, as it has to go to London first. We posted it on the 28th July. Since August 1 all communication with England had been cut off, so we’re likely to see some economical days in front of us. However, it’s all in the game, and so far we’ve nothing to grumble about. At six o’clock, as I said, on Saturday, the 1st August, the order was issued for mobilisation. We were in Kurfurstendamm at the time. It was like a thunderclap. People wildly snatched at the circulars; men, women and children ran in all directions- the feeling of horrible tension, an awe before a dreaded unknown- was painted on everyone’s face, ourselves included. This only lasted a second, then hurry, activity followed. The motors flew like mad; the people never left the streets- every man we met was going on to the French or Russian border, and took a sad goodbye from us, nearly always accompanied by the sentence, “We’re all off; my mother has no sons left now.” Those who were not going to fight were trying to quit Berlin for Denmark or England for safety, mostly Americans and English like ourselves.

The Davenports left their flat exactly as it stood, with all their furniture, silver, linen, etc and got off at once. Their train went at 10.30pm. We went down to the Zoological Station to see them off. Thousands were already there- officers and men joining their regiments, huddled groups of frightened Russian women fleeing, frightful commotions. No one would take paper money; gold and silver were quite out of the question. Already on Friday several business people had closed their premises, intending to wait until prices went up before they re-opened. The Government soon settled that. They issued at once a standard price for salt, flour and sugar, and threatened punishment to the first person who was trying to enrich himself out of a national calamity. The women went quite silly, bought up bags of everything, provisions enough for months, thus making the market at once scarce. One really doesn’t know what to do in times like these, especially the mothers of small means and large hungry families.

The Davenports, as I said, got out of Berlin, but whether they’re in England, Holland or at the bottom of the sea we’ll probably not know for weeks at least. We get letters from nowhere- neither can we send any. There’s absolutely no communications with any other but the German world.

When war was declared against Russia then began the denunciation against the traitorous Czar and his barbarous people. The Berliners went quite mad. They stormed the open automobiles as the Russian personal left the Embassy, beating the occupants with sticks and umbrellas.

Next Sunday we read where French aviators dropped bombs on Nurnberg before France had declared war. Also that the Russians were across the border at East Prussia.

Everybody was wondering what England will do. We thought it looked like business when we read in the paper that our Ambassador had asked the American Ambassador to look after the interests of the British in Germany, if hostilities broke out.